Charlie Arglist: Did I ever tell you my father was a twin?
Pete Van Heuten: Identical?
Charlie Arglist: Fraternal. Looked a lot alike, though, him and my uncle. Different temperaments completely. My father, he's a cop. By-the-book guy. Believed in the law, wanted his only son to be a lawyer. Drank in moderation, didn't smoke. Kept up his life insurance premiums. Voted in every election, not just for president.
Pete Van Heuten: Lemme guess, uncle didn't vote?
Charlie Arglist: He said he didn't want to encourage the bastards. In and out of jail from the time he was 16... drunk all the time, fucked everything that walked. Won a fortune playing poker, lost it all the same way. Lost an eye in a fight. My father was 54 when he died of a massive embolism, right here in Wichita. My uncle died the very next day in a car wreck in California. So the point is... it is futile to regret. You do one thing, you do another... I mean, so what? What's the difference? Same result. 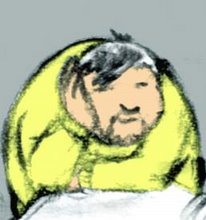